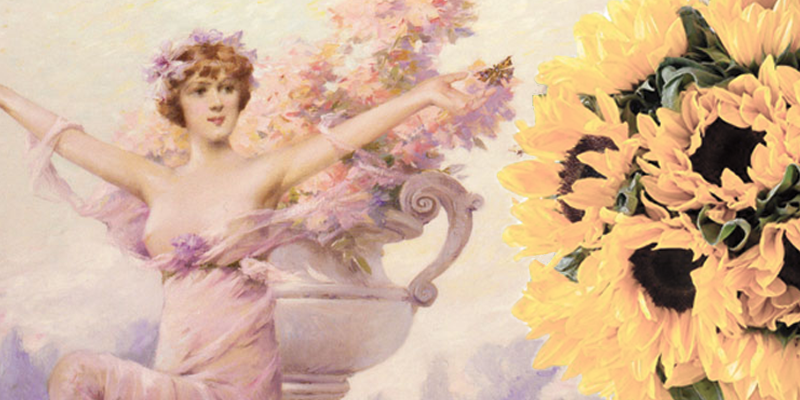 Flowers have long had rich symbolic significance, so it’s no surprise that quite a few myths have sprung up around them. From daffodils and hyacinths to roses and peonies, flowers have played a part in many old tales. Greek and Roman mythology in particular often features flowers – partly because the ancient gods had a bad habit of turning people into them!

Over time, these myths have fed into modern flower meanings and associations. For example, the God of Love Cupid (Eros in Greek mythology) was often depicted carrying roses. Even today, they remain one of the most iconic symbols of passionate love. Similarly, the myth of Paeonia (see below) led to the Victorians naming ‘bashfulness’ as one meaning of the peony in the Language of Flowers.

In this article, we’re going to share some of the most interesting (and weirdest) floral myths from a variety of customs, traditions and cultures.

Peonies may seem like a modern floral sensation, but they’ve actually maintained their iconic status for thousands of years. They are the traditional floral symbol of China, where they are known as the King of Flowers. In the Middle Ages, peonies were valued for their medicinal properties, and research has shown that they do actually have anti-inflammatory effects!

On top of all this, peonies have two (slightly contradictory) Greek myths describing their origins.

Paeon: Physician to the Gods

The first myth describes Paeon, who was the Greek physician to the gods. Yes you read that right – Gods apparently need regular medical checkups too. There’s only so far omnipotence will take you after all.

Paeon was an incredibly talented doctor, so naturally his teacher – Asclepius, the god of medicine and healing – flew into a murderous jealousy-fueled rage after Paeon successfully cured Hades of an ailment. So much for taking pride in your student’s accomplishments!

To save his life, Zeus kindly transformed him into a peony. We do wonder if this was really a favour – is it really preferable to be stuck as a flower for all eternity?

This alternative myth describes a beautiful nymph Paeonia. Due to her exceptional beauty, Apollo had a bit of a thing for her.

This unfortunately rubbed Aphrodite – goddess of love and beauty – up the wrong way, causing her to fly into a murderous jealousy fueled rage. Her revenge was to turn Paeonia into a red peony. It’s said that Paeonia blushed when Aphrodite caught her and Apollo flirting, and that’s why peonies symbolise bashfulness.

We’re not sure what it is with these Greek gods and transforming people into flowers, but they sure seemed to make a habit of it!

Flora: The Roman Goddess of Flowers

Flora was the Roman Goddess of flowers and spring, responsible for the blossoming of flowers, fruit trees, vines, and even crops. In depictions, she is usually seen holding a bouquet of flowers.

She had her own festival – the Floralia – held at the beginning of May each year to celebrate the coming of spring, and the renewal of life. This was actually a fairly wild affair compared to other Roman festivals, with games, theatre, competitive events – and at one point, apparently an elephant on a tightrope. People wore brightly coloured clothes and just generally had a bit of a party. Flowers are certainly worth celebrating!

Daffodils: The Story of Narcissus

The term ‘narcissist’ originates from the story of Narcissus, a figure in Greek and Roman mythology. He was renowned for his beauty, and just a little bit obsessed with himself.

He was known for breaking hearts, and this eventually landed him in some trouble. In the Roman version of the myth, he brutally rejected the nymph Echo – leaving her so distraught she turned into her namesake, an echoing sound.

The goddess of revenge, Nemesis, wasn’t too impressed by Narcissus’s behaviour and decided to punish him. She lured him to a pond, where he saw his own reflection and immediately fell desperately in love with it.

Not realising he was looking at his own image, he refused to leave the pool, simply staring entranced into the water below. He eventually became distressed by the pain of unrequited love, and transformed into a daffodil (the Narcissus flower).

Basically, the warning here is to not upset Greek gods because there’s a fairly high chance you’ll get turned into a flower.

This myth tells the story of the water nymph, Clytie. Clytie adored Apollo, the sun god, but he left her for the sea goddess Leucothea. Left heartbroken, Clytie watched Apollo as he crossed the sky in his golden chariot for 9 days without food or water, slowly wasting away.

You might be able to guess where this is going at this point. Eventually, Clytie transformed into a sunflower, her face permanently turned towards the sun.

Anemones & The Death of Adonis

Adonis was an exceptionally handsome man and Aphrodite’s mortal lover (although he was apparently more interested in hunting than spending time with Aphrodite). Unfortunately, this mortality didn’t turn out too well for either of them. One day whilst hunting, Adonis was killed by a particularly vicious boar.

Devastated, Aphrodite held him in her arms as he died. His blood mixed with her tears and a red anemone flower sprung up where the droplets landed. Ever since, anemone flowers have symbolised death and loss, or forsaken love.

The story of Fahad and Shirin has been retold across many cultures and traditions, from Iran and Turkey, to India and Afghanistan. The tale is believed to be of Persian origin and usually follows roughly the following plot.

Farhad was a lowly craftsman (a stonemason or muralist depending on the version) and fell in love with the princess Shirin. Her parents were unwilling to allow the two to marry, and so set Farhad a near impossible task – he had to carve a long tunnel through bedrock.

To everyone’s surprise, he was successful and the King was not happy. He sent a messenger to lie and tell Farhad that Shirin had died. Farhad was distraught, and took his own life using the same tools he used to dig the tunnel. Upon hearing the news, Shirin went to see Farhad’s body. Similarly overwhelmed by grief, she also took her own life.

Their blood pooled together, and in its place red tulips grew. The story of these starcrossed lovers is why red tulips are still said to symbolise undying love.

Hyacinthus and Apollo: The Origin of Hyacinths

Hyacinthus was an incredibly handsome Spartan prince and hero in Greek mythology. His good looks attracted the attention of several gods, including Apollo the sun god (what a surprise), Zephyrus the West Wind, and Boreas the North Wind.

Hyacinthus chose Apollo over his other suitors. As you can imagine, the other Greek gods responded in a totally rational and not remotely jealous way to his decision.

One day, Apollo and Hyacinthus were having a game of discus. Hyacinthus wanted to impress Apollo, and chased after the discus. Zephyrus chose this moment to make his move, and blew the discus at Hyacinthus’s head, killing him.

Apollo was devastated, and refused to let Hades take Hyacinthus’ soul to the underworld. Instead he transformed Hyacinthus into the Hyacinth flower.

Carnations pop up in mythology and tradition quite frequently. In Ancient Greece, carnations were often used in ceremonial crowns and garlands, whilst in Ancient Rome the flower was known as “Jupiter’s flower” and used to honour the King of the Gods.

In Korean culture, carnations serve a different purpose. They are used in divination to predict the fortune of young girls. Three cut carnations are placed on the child’s head, and whichever dies first gives a hint towards her future.

If the top carnation dies first, it means that the girl will suffer challenges in later life, whilst the middle one shows she will suffer in her youth. However, if the bottom flower dies first it means that her whole life will be filled with turmoil. There’s evidently no chance for a peaceful life!

We hope you’ve enjoyed these floral myths. The takeaway from this is definitely not to anger a Greek God – at least if you value your humanity!

Which of these myths is your favourite? Let us know in the comments.