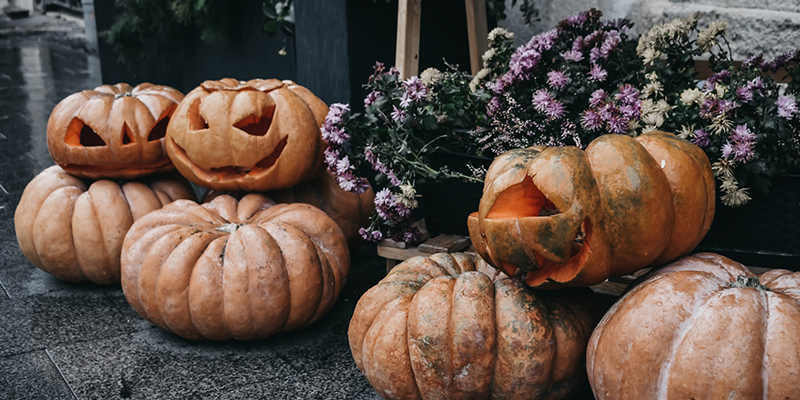 Our top 10 Halloween Facts that you didn’t know!

There are many things we don’t know about Halloween, so here are some fun facts to clue you in!

1. The Origins of Halloween

Halloween is thought to have originated around 4000 B.C., which means Halloween has been around for over 6,000 years. Several theories exist as to how exactly Halloween began, but it’s been linked to the ancient Celtic festival of Samhain.

This festival marked the beginning of winter, and the Celts believed that on this night the spirits of the dead returned to earth, and that supernatural events were more likely to occur. They marked the event by wearing costumes crafted from animal skins and lighting bonfires.

The largest pumpkin ever measured was grown by Mathias Willemijns, who broke the world record in 2016 with an absolutely massive 2624 lb pumpkin. This beat the previous world record by 300 lb, and dwarfed the original world record set in 1900, which was 400 lb.

Growing monstrously huge pumpkins is a competitive business, with large cash prizes often involved. Giant pumpkins need a lot of space to grow, alongside lots of knowledge and care. Unsurprisingly, record-breaking growers are very secretive about their methods.

4. The Origin of Halloween Costumes

Dressing up as ghouls and other spooks originated from the ancient Celtic tradition of townspeople disguising themselves as demons and spirits. The Celts believed that disguising themselves this way would allow them to escape the notice of the real spirits wandering the streets during Samhain.

Although today most people carve pumpkins, years ago they used turnips, and believe us, they looked much creepier. Traditionally, jack o’ lanterns were lit to ward off evil spirits.

Pumpkins were not originally used because they had not been discovered by Europeans, as they are native to North America. When they were found by European immigrants, they realised that pumpkins made superior jack o’lanterns, as they are both larger and easier to carve, and thus the modern version of the tradition was born.

The owl is a popular Halloween image and in several cultures, owls were thought to be witches in disguise. In medieval times, to hear an owl’s call meant someone was about to die, or that some other evil was afoot.

Harry Houdini (1874-1926) was one of the most famous and mysterious magicians who ever lived. Strangely enough, he died in 1926 on Halloween night as a result of appendicitis. Fancy that!

Black cats are a well known symbol at Halloween because they were once believed to be witch’s familiars who protected their master’s dark powers. We just think they’re super cute, look at that face!

The custom of trick-or-treating began with mumming in medieval times, which was the custom of going to different houses and performing in costume in exchange for food or drink. It became associated with Halloween as it was believed it would appease the restless spirits that wandered the earth at this time.

This tradition continued to develop and transform over the centuries, giving rise to customs like ‘guising’ and ‘souling’, which eventually spread to the USA and Canada. The phrase “trick or treat” comes from North America, and was first used in a Canadian newspaper in 1927. Halloween pranks had become commonplace, and the tradition of asking for treats at doors (to avoid a trick) became more and more widespread over the 20th century, along with the phrase itself.

Orange and black are common features of any Halloween colour palette. This is because orange is associated with the autumn harvest, whilst black is linked with darkness, the unknown, and death – fitting for a festival of the dead!

So there you have it, ten fun facts about Halloween. Here at Blosoming Gifts, we love to celebrate Halloween and we have some gorgeous autumn flowers that can be incorporated into your decorations.

On top of that, our sweet hampers are the perfect treat this Halloween. Our Tear & Share Sweet Hamper is packed full of classic chocolates, sweets, chews and lollies, from Cadbury’s Freddos to Popping Candy, and Rainbow Drops. It’s a handy gift to have around when trick-or-treaters come calling…But then again, who’s stopping you just giving in to your sweet tooth?

Our New Partnership with Fantastic Services!
Why Rainbow Roses are the Perfect Gift